Part of scaling out any environment is having a good template that can be spun up and incorporated easily into your imaging and configuration management prep before it’s added to your platform of choice. For Nutanix, I wanted to get these base templates ready and share what I needed to do for Ubuntu/Debian, CentOS/RHEL, and CoreOS:

Ubuntu 14.04
1. Run any updates and add any packages you want to be included in your baseline template with sudo apt-get. Keep in mind that for most packages and configurations, you will want as minimal an image as possible and add those components with Chef, Ansible, etc. Shared keys may be copied to an admin user's ~/.ssh directory to prepare for passwordless SSH.
2. Precreate DNS entries for VMs so that when clones boot they pull hostname from DHCP.
3. Add a ‘hostname’ script under /etc/dhcp/dhclient-exit-hooks.d:

4. Make the ‘hostname’ script ready: chmod a+r hostname
5. Poweroff the VM that will become the template.

CentOS 6.5
1. Run any updates and add any packages you want to be included in your baseline template with yum or the appropriate package manager. Keep in mind that for most packages and configurations, you will want as minimal an image as possible and add those components with Chef, Ansible, etc. Shared keys may be copied to an admin user's ~/.ssh directory to prepare for passwordless SSH.
2. Precreate DNS entries for VMs so that when clones boot they pull their hostname from DHCP.
3. Remove or delete the HWADDR line from the /etc/sysconfig/network-scripts/ifcfg-eth0 file.
4. Remove the mapped network device so that when a new clone boots, it grabs a new MAC and is able to re-use eth0: rm /etc/udev/rules.d/70-persistent-net.rules
5. You can leave the hostname at localhost.localdomain since the new hostname will be mapped on boot up from the DNS record lookup.
6. Poweroff the VM that will become the template.

CoreOS
CoreOS is a special case as it deliberately is “Just-enough-OS” to run containers. To get into the really interesting work of CoreOS with Kubernetes and Tectonic, you’ll need a cluster master(s) with more details around cluster architecture from CoreOS: https://coreos.com/os/docs/latest/cluster-architectures.html
For cloning mass amounts of nodes, you’ll want to create your own cluster member/worker/minion template that feeds into that master with a cloud-config file on a config-drive. Configuring an etcdmaster is here until I customize my own procedure.

1. Download the latest ISO from the stable, beta, or alpha release channel. You can also set this when you install to disk.
2. Make sure you have one or more ssh key(s) generated on the host/desktop/laptop you would like to use to connect to any of these worker nodes for individual configuration: ssh-keygen –t rsa –b 2048. Also, since you'll basically have a shared ssh key across the hosts at this point, Ansible can take advantage of this easily, more info from CoreOS here and from me here.
3. Create a user_data text file according to directions here.
4. Create a user_data text file with your favorite text editor. You’ll need a few changes for an etcdmaster node, but here is an example cloud-config file from coreos here: 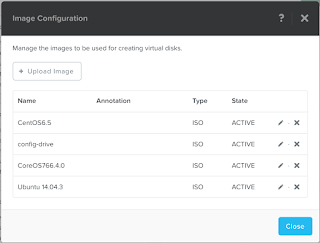 7. Create your base CoreOS VM and attach both ISO’s and boot the VM. 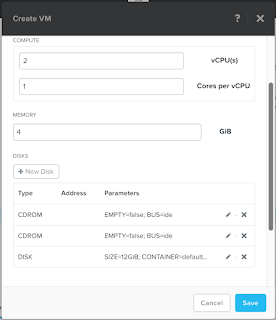 8. When your VM boots, it should auto-login as the ‘core’ user and you can run the install to disk: sudo coreos-install –d /dev/sda –C stable –c /media/configdrive/openstack/latest/user_data
9. Eject both ISO’s and power off the template: sudo poweroff.

Mass Cloning in acli
Using either the Acropolis CLI or REST API, you can set up the quick provisioning of a massive number of clones, given the number of nodes at your disposal.
1. To clone the VMs using the Acropolis CLI, ssh into either the cluster IP or a CVM IP as user Nutanix.
2. At the command line, enter ‘acli’ and feel free to customize the upper bound of VMs that you can build on your Nutanix cluster (code modified from here https://vstorage.wordpress.com/2015/06/29/bulk-creating-vms-using-nutanix-acropolis-acli/):
for n in {1..10}
do
vm.clone vm$n clone_from_vm=basetemplate_name
vm.on vm$n
done
3. If you want to script the operation, just preface the vm.operation with acli, as in:
for n in {1..10}
do
acli vm.clone vm$n clone_from_vm=basetemplate_name
acli vm.on vm$n
done
4. REST examples of cloning VMs via Acropolis on Github, https://github.com/nelsonad77/acropolis-api-examples courtesy of Manish Lohani @ Nutanix.
5. The number of cloned VMs should power on, claim their IP/hostname, and be ready for deploying a configuration with your favorite CM tool.