Ansible Setup for Nutanix on Acropolis

Getting started with a new provisioning platform like Acropolis on Nutanix can seem unfamiliar if you’ve spent many years with the way that vSphere creates virtual machines. However, you can bootstrap your environment with just a few VMs that allow you to clone and then set app configurations quickly.

The most popular configuration management platforms you may already be familiar with, and in no particular order are Chef, Puppet, Ansible, and SaltStack. I’d like to begin with Ansible just as a relatively straightforward example. If you’d like a more thorough Ansible introduction, check here. After imaging a Nutanix cluster with the Acropolis Hypervisor (or AHV), you should create a container and storage pool so that you can immediately begin laying the baseline for your environment. First let's create a default template we can use, in this case, I am using Ubuntu.
Now that we have a base template ready, we can use it to build our master Ansible server and any clients that we wish to overlay configurations.


At this point you'll want some test VMs to show off Ansible so feel free to clone one of more VMs from your starting template and make sure they have unique IPs and hostnames. For Ansible to communicate successfully, you'll need id_rsa, id_rsa.pub, known_hosts, and authorized_keys files on each VM. By cloning the base template, you should have 3 of these 4 pieces, but without known_hosts, you will receive an interactive message the first time you initiate communication with a new client. In order to disable this, in effect granting passwordless ssh access, you can edit /etc/ansible/ansible.cfg or ~/.ansible.cfg and add the following line:

Here is a simple command to verify that Ansible is working as intended:
ansible -m shell -a 'free -m' some_hostname

Ansible keeps track of the set of commands you want to run, or "plays", in a playbook. Roles may be used to encapsulate and help organize multiple playbooks that could be applied collectively. Example roles and playbooks are located on github here and on Ansible's galaxy site here. For a quick nginx example, follow the directions here, and to customize the installation for Ubuntu, check here. A successful run will look similar to the following: 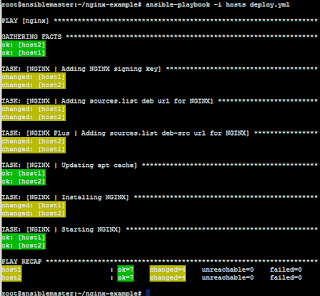 Also worth noting is that Ansible's playbooks could also be applicable when configuring other parts of your environment, for example even networking devices such as Cumulus Network switches, with more details from Github here.